One should always question the established paradigm from both scientific and spiritual points of view. This is how things evolve and new, hidden wonders come to be. I can say for myself (and by my own experience only, which is as valid as anyone else’s) that a new, gargantuan, extreme and yet beautiful and harmonious paradigm is emerging. This time, I will speak about my first contact with two of my deceased relatives through an intense and beautiful, yet dangerous, mediumistic experience. The experience I had is not for the faint of heart and not everyone is ready to live it in the way I did.

Before I proceed, I would like to inform the reader with a little paragraph about the state of things when it comes to phenomena like this.

Science and Spirituality didn’t really get along since the first was established centuries ago. However, the spiritual wisdom of the ancients is now being intersected with the new discoveries in the fields of quantum mechanics and neuroscience, as far as my humble knowledge is concerned. Near-death experiences (NDE’s), Instrumental Transcommunication (ITC) and the Psi phenomena are maybe the most relevant fields of beyond-normal experiences that deserve a special and sophisticated analysis from every scientific and religious mind. NDE’s are maybe the most prominent phenomena and I advise the reader to search for “Consciousness Podcast” on Youtube, which is a channel with a lot of interviews about consciousness. There is already a vast corpus of data regarding NDE’s. ITC is a more recent subject, although its roots are prominently based from the 19th century onwards thanks to works related to Electronic Voice Phenomena (EVP). The reader can find information on Anabela Cardoso’s channel, on Youtube, on her two books and other rarer books from other experimenters. As for Psi phenomena, Russel Targ has books on the subject and even a banned TED talk “Is ESP real?” or “Banned TEDtalk about psychic abilities” about this. However, may the reader always have a clear, open and wise mind to create his/her own point of view and derive conclusions. Now, I will proceed to describe my first mediumistic experience.

It all happened a little before my birthday, 19th of March, on 2016. I don’t remember the exact date but I guess it was the 14th of March. Two weeks prior to this day, I started having problems with my sleeping patterns. However, I still managed to get some rest during the night. I had a girlfriend at that time (I won’t reveal her name to maintain her privacy). She had told me some months before the mediumistic event that her mother, whose name I won’t reveal, had a gift. That gift was helping the stranded souls on Earth to make the passage to Heaven. She served as a “barca” (“barge”, in English) for the souls to traverse into the next plane. Supposedly, according to what my ex-girlfriend told me, her mother had the help of her deceased uncle, her mother’s brother, who died because of a tragic gunshot. After his death, she started developing her gift. She would get very sick and stay in the bedroom, in the dark. When my ex-girlfriend told me her mother was sick, I knew that she was working with this higher gift.

So, when those two weeks came, I started acting on pure intuition and feeling. I had discarded logical thinking and was following whatever my heart told me to do. I visited my deceased grandparents’ graves and started making representative drawings of my thoughts. They were actually an inner exploration of the possibility to make an artificial substrate through which the deceased could talk. However, there came a time when it became a maybe poisonous, psychotic behaviour. Nevertheless, the wonder happened.

On the 14th, I was at the classroom, attending a class of Calculus II. In the beginning, I felt a change in my perception of reality. It was as if I was experiencing a virtual reality and I had this strong feeling that I should go to my ex-girlfriend’s house. I stayed in the classroom until the class was over and suddenly, when I got out, I felt as if I was possessed by some force. I got in the car and drove for five minutes until I reached her house. When I reached the main entrance’s gate, my ex-girlfriend came to me asking me what was going on. I was unable to speak and felt weak. When we entered the house, I heard women praying and a strong discomfort in my chest, right in the heart. As the discomfort got stronger, the moans of my ex-girlfriend’s mother would get stronger. It was almost (I dare say that they were) synchronous: discomfort in the chest – increase in moaning intensity. I was guided to the bedroom where the women (friends to the mother who knew about her gift) and the mother were. They told me to not look at her and to pray. To avoid looking, I closed my eyes and did start to pray. When I did it, the pressure in the chest got stronger and I started crying. Seeing that, the women around the bed and my ex-girlfriend guided me to the opposite bedroom, which belonged to my ex-girlfriend. I laid on the bed, crying silently, saying that “the miracle was to you” to my girlfriend, while having increasing pressure and discomfort in the chest. After a while, I felt like my chest was going to burst and the mother shout out a loud scream. Then, things started to calm down in a wavelike fashion, the pressure in the chest getting weaker and weaker. I was suddenly struck by a strong will to call my grandmother Maria, still alive at the time of this writing. I did so and she said she was okay, but I couldn’t believe it. So I asked my ex-girlfriend if we could go to Fundão to check if it was true. After 5 minutes of driving the car, the mother’s friends called us and asked us to turn around and go back to the house. We did so and, when we arrived, the mother’s sister came to me and told me “Is your grandmother’s name Manuela?”, to which I replied “Yes.”; “There is also another person whom we do not know…”, to which I said “He must be my grandfather!”. I could feel it, after all that happened before. Then, she told me “Your grandparents have a message to you. They send you a very strong hug, they say for you to be well behaved and that everything is in the Lord’s peace.”. She then gave me a strong hug and I thanked her for the message.

The interesting part is that I was studying Industrial Chemistry, which is impressive because, as a science student, I should have felt sceptic about this whole subject, but I didn’t. I actually felt very open-minded and felt respect for what I was told by my ex-girlfriend prior to the experience. To tell the truth, I actually believed it. Maybe it was my open-mindedness, my attitude as the scientist that sees wonder in the unknown, that actually granted me this experience.

I guess this was merely symbolic. My grandparents were christians, but not excessively religious. As far as I know, my grandmother Manuela lived the Christian faith in her own way. However, I can’t talk a lot about my grandfather Esteves because he died when I was one year old. It’s really mysterious. I guess that they used this sentence symbolically because God, or Source, or Truth, or the great pillar of existence itself, or Light, is not definable by earthly terms. So they might have used the catholic terminology to more accurately convey their message.

Is the way to the Light difficult?

The way to the Light is not as difficult as is told by certain religious beliefs. My grandparents were not perfect, but they were good people according to the stories I heard about both of them and to what I knew of my grandmother Manuela in her lifetime. It is true that one could consider her a saint, but she wasn’t perfect. It’s important to note that my grandmother had departed ten years before this mediumistic experience. Photo 1 shows my grandmother Manuela and Photo 2 my grandfather Esteves: 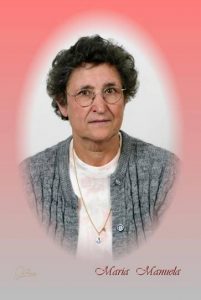 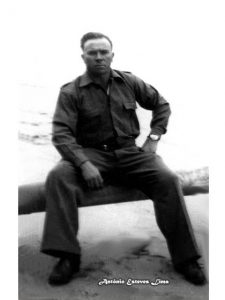 If someone, by any chance, by any means, receives a communication from my grandparents, I would be eternally grateful if such information could be shared with me. It would be a huge boost to my family’s cohesion and a further proof of life after death and ITC functionality. I would most certainly put my best efforts to fortify ITC even further and help other people communicate with their deceased loved relatives. My personal e-mail is aderitomachado33mail.com. I also have a theory on how we could possibly strengthen the communications’ effectiveness and preciseness, but that is a story for another time.