You are here:
ITC Journal 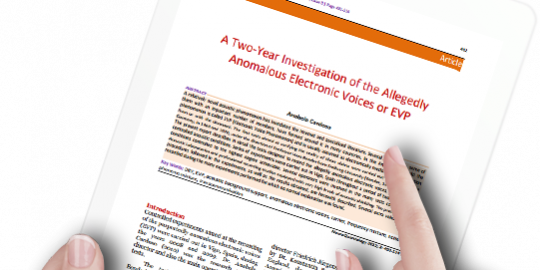 Brief history of the ITC Journal

In the year 1999, Anabela Cardoso, involved in Instrumental Transcommunication research since the end of 1997, decided that it was time for her to contribute more decisively to the tremendous endeavour made by her invisible communicators to contact our world by electronic means. She had been recording DRV messages from communicators who reported that they were speaking from Timestream Station in the next dimension of life (traditionally called ‘the other world’) in her studio from March 11, 1998. Among many other things, the communicators confirmed the extreme difficulties involved in their task of speaking through DRV.

She decided after reflection that the best way to help would be to start an international publication to promote the dissemination and study of ITC phenomena in a serious, rigorous way. She also decided that it would be helpful to report her own positive results, which had become amazingly consistent, and would also publish the results of other ITC operators. One of her main objectives was to seek the cooperation and support of eminent personalities in this area of research, and very particularly of open-minded scientists interested in examining and analysing the phenomena. The initiative flourished and with the invaluable cooperation and help of Anabela’s friend, Carlos Fernández, who at the time was also her companion in experimentation, the ITC Journal became a reality.

Starting the Journal was not an easy task as neither Carlos nor Anabela had at the time the skills to allow them to run a publication with the necessary capability and confidence. Nevertheless, with a great deal of determination and enthusiasm, and the support of the majority of the members of a distinguished Editorial Board which was quickly formed, the project became a reality in the first trimester of the year 2000. A special word of appreciation is due to Professor David Fontana from Great Britain who was of great help, especially at the outset when neither Carlos nor Anabela had the necessary experience, and who contributed to the venture with his expertise and wise advice. In the course of Anabela’s duties as a senior diplomat for the Portuguese Foreign Ministry she was posted in 1999 as Consul General to Lyon, France, and from his base in Spain Carlos therefore had to take responsibility for formatting and laying out the Journal, supervising the typographic work and circulating the publication to the list of contributors and subscribers that began quickly to grow. From Lyon, Anabela contacted leading personalities in the field of Instrumental Transcommunication to request them to contribute with their experiences and opinions. She wrote reports about her own results, and also translated into Portuguese, Spanish and English a great number of the many papers accepted for publication. The Journal was from the start truly a team effort, and it was thanks to this effort that the difficulties, consequent upon both the daring nature of the enterprise and the logistical problems caused by the fact that Anabela and Carlos, the two main participants, lived far away from each other in different countries, were overcome.

The three languages used in the ITC Journal require explanation. The group of communicators that from the beginning communicated with Anabela Cardoso and with the small group of friends that started the work with her, identified themselves as the Portuguese Group at Timestream Station. As a measure of appreciation for these entities who originated the contacts, Portuguese was naturally the language in which to publish the Journal. The inclusion of Spanish also seemed essential as many of the readers of the Journal were drawn from Spain, and Anabela’s studio, where the first meetings took place and the communicators spoke for the first time and where her experimentation currently continues, is located in Spain. Finally, English was seen to be important due to its present status as the most widely spoken language in the world and because it enables investigators from different nationalities to communicate with each other. Interestingly, nowadays the majority of the readers of the Journal are English-speaking.

It goes without saying that national identity plays no part in the affairs of the next world, and in view of this as well as the conviction of its founders, the ITC Journal is a publication open to all mankind and free from any ideological tendencies – religious, political, or otherwise. The choice of languages therefore must be seen to carry merely practical and symbolic meaning.

The main concern of those at the origin of the Journal is the truth. Invitation to submit papers is extended to the writers, taking into consideration their reputation and knowledge. All texts published in the Journal, even the ones for the Testimony section, are carefully scrutinized by its Editor, and when their authors announce the reception of anomalous voices or images, they are requested to send a sample of the communications concerned, prior to publication. Even so, clearly we cannot guarantee the total reliability of the contents of all the papers published in the Journal. We do everything within our reach to make honesty the unquestionable characteristic of the publication. We aim at the total transparency of all the reported information; however, given the huge, often intercontinental distances that separate those who take part in the Journal, it is an impossible task to swear for the authenticity of all the details of the materials published. The area of ITC research, as others in the field of psychic phenomena, is of a subtle, elusive nature, and to pledge the full control of all the reports is truly impossible beyond our own personal experiences.

We spare no effort in favour of the whole truth, which, in our opinion, is the most important tool of the extraordinary odyssey that Instrumental Transcommunication research stands for. Our readers can count on our total dedication to this sole ‘cause’!