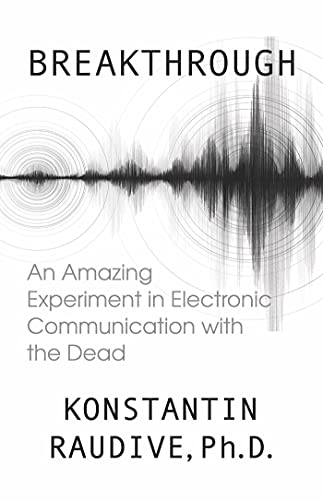 In 2021, the 50th anniversary of the first publication of Breakthrough, “What happens after physical death?” is still the big question concerning the nature of existence.

In 1959 Swedish artist and filmmaker Friedrich Jurgenson was making a tape recording and during playback he discovered what sounded like a human voice on the tape. He put it down to faulty equipment but when he searched other tapes, he found more voices, which seemed to be messages from his dead mother. Jurgenson recounted the experience in a book titled Voices from Space. The book impressed Raudive and subsequently he and Jurgenson collaborated for a time and encountered more voices.

After a difference of opinion, Raudive undertook his own research amassing a collection of thousands of voice recordings and in 1968 his work was published in German under the title, Unhörbares Wird Hörbar (The Inaudible Becomes Audible).

In 1969 after being approached at the Frankfurt Book Fair, British publisher Colin Smythe asked his colleague Peter Bander to assess Raudive’s book with a view to publishing it in English, and, unbeknown to Bander, did his own experiments with positive results.

Since that time Jurgenson and Raudive’s experiments have been replicated thousands of times by researchers and enthusiasts all over the world and Breakthrough remains a classic in the genre.

The communicators overriding message?
“WE ARE NOT DEAD!”

Born in Latvia, Konstantin Raudive Ph.D. (1909-1974) was a noted European psychologist and philosopher who lived in Sweden and Germany after the end of World War II. The author of six books including two novels, Raudive’s name is known to both literary and scientific communities.