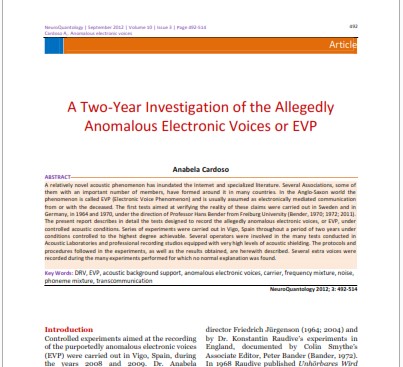 A relatively novel acoustic phenomenon has inundated the Internet and specialized literature. Several Associations, some of
them with an important number of members, have formed around it in many countries. In the Anglo-Saxon world the
phenomenon is called EVP (Electronic Voice Phenomenon) and is usually assumed as electronically mediated communication
from or with the deceased. The first tests aimed at verifying the reality of these claims were carried out in Sweden and in
Germany, in 1964 and 1970, under the direction of Professor Hans Bender from Freiburg University (Bender, 1970; 1972; 2011).
The present report describes in detail the tests designed to record the allegedly anomalous electronic voices, or EVP, under
controlled acoustic conditions. Series of experiments were carried out in Vigo, Spain throughout a period of two years under
conditions controlled to the highest degree achievable. Several operators were involved in the many tests conducted in
Acoustic Laboratories and professional recording studios equipped with very high levels of acoustic shielding. The protocols and
procedures followed in the experiments, as well as the results obtained, are herewith described. Several extra voices were
recorded during the many experiments performed for which no normal explanation was found.