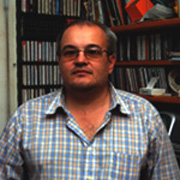 Was born in Buenos Aires in 1965 and studied Electronics in the National Technological...

Carlos Gabriel Fernández was born in Buenos Aires in 1965 and studied Electronics in the National Technological University of the Argentinean capital. His interest in the investigation of anomalous phenomena drove him to harmonize his technical background with a career in journalism. He is the author of the books Parapsicología y Electrónica (1995), Psicofonías y Psicoimágenes (2002) and Voces del Más Allá (2006). Furthermore, he is collaborator of specialized publications such as Año Cero, Más Allá de la Ciencia, Enigmas and the now discontinued Karma 7. He is also the Technical Editor of the ITC Journal. He has worked in different television programs, such as ‘Mysterious World’ of the Television of Galicia and has collaborated and presented innumerable radio programs in the last 15 years.